AS 90940 Demonstrate an understanding of Mechanics. End of Unit test preparation

The End of unit test for this achievement standard is next wednesday. Here is a practice paper for you to try and find out those aspects you need help with. Complete the paper as homework for Monday. I’ll put a tutorial answer on the blog on Monday for you to check your answers.

There will be a tutorial in Lab 52 tomorrow morning beginning at 7.30 when we will do this paper and you can sort out any issues then. I realise it is an early start but you will get your homework done and not need to slave over science during the weekend. It also signals to me that you are committed to getting a result in this externally assessed achievement standard. Good luck

First, a very boring movie clip illustrating circuits that have been connected in series and parallel. It shows some differences between the two. There are similarities between the circuits also.

Have a look at the worksheet, draw up a Venn diagram and identify the similarities and differences between the two types of circuit:
.

Check out a possible set of answers:

Use the knowledge you have gained in this topic and plan a video that will help next years class to learn about series and parallel circuits.

Your video should contain reference to as many of the similarities and difference you have learned about.

You will need a camera that can take short video clips. If you use a mobile phone you need to be able to upload for editing. Get creative. Scientists are artists who really understand their medium.

You can work in groups of a maximum of four

Don’t use your brain, you will need it later in life.

Kinematic problems can be solved without worrying too much about the question. The key is to identify the information and choose the appropriate formula.

The Balloon Expedition Company of New Zealand  take you on flights over Auckland’s north west. They pick you up at the Westgate Centre and transport you to the take off point. About half an hour is required to partially inflate the balloon with cold air then heat it up with three giant bunsen burners till the balloon has neutral buoyancy.  Its time to board the basket ready for lift off.

The air in the envelope is very hot, about 95 degrees celcius so the top of your head can get cooked if you are directly under the opening. An hour later after gently floating with the breeze (there is no wind, you move with the air), Darryl a very experienced pilot puts you down gently in a field somewhere out west. The destination is a pot luck affair and is determined by wind speed, wind direction and flight duration. Landing is a stressful time for Darryl as not all property owners appreciate a 5,000 cubic metre balloon dropping into the back field as they are having breakfast. The farm owners were friendly where we landed but apparently if we had flown over the fence into the next field we would have received a  frosty reception.

What the lovely people at the Balloon Expedition Company don’t tell you is that you have to pack the ballon back into its crate. Surprisingly it is no more difficult than rolling up a tent and putting it in its bag. The drive back to Westgate in the jeep is almost as exciting as the balloon flight and the champagne breakfast is first class.

Darryl’s offsider tried to tell us that champagne breakfasts were invented by early balloonists as a means of placating irate peasants when they landed in the middle of their crop fields…..hmm maybe.

Balloons are are designed so that they can reach a height of 100 meters in about a minute. Sixth form students should be able to answer questions about the rate of climb.

How big a balloon do you need to lift the combined masses of the envelope, basket, burners, gas cylinders and passengers? It turns out that the calculation is quite straightforward.

A combination of balloon volume and  temperature difference between the air inside the envelope and the air outside determines the lifting force and approximately 4.073 cubic meters of hot air are needed to lift each kilogramme of  mass.

This figure can be plucked quite literally out of the air using the ideal gas equation with a number of  assumptions about variables. Have a look at the science,  Archimedes had it all figured out 2022 years ago. 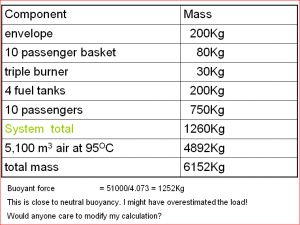 A gore is a segment of a three dimesional object fabricated from 2 dimensional material.

Its Physics jim but not as we know it…..Rainbows End 2009 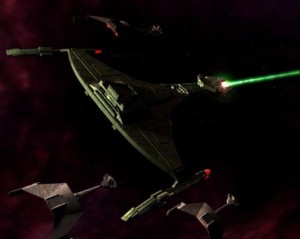 Physics can be truly weird and often counter intuitive. Everyone will be familiar with the reference to Star Trek in the title of this post and be aware that  Klingons are very nasty extra terrestrials.

It turns out that Physics is stranger than fiction and Newtonian mechanics which describe the world around us (speed =distance/time for example) become hopelessly inadequate as you approach the speed of light. Einsteins Theory of General Relativity predicts time dilation or stretching. If you take a summer holiday on a beach  near a black hole, time is dilated and the vacation lasts longer. As a consequence you return younger than friends who stayed at home using botox to slow  ageing. G P satellites  take time dilation into account when they compute accurate positions. Strange but true.

The laws of physics at Rainbows end…….. feel the force

…….and finally the worksheet for anyone who has lost the original. Eric and Bonita would appreciate feedback on the field trip. Any questions?