Year 11: AS 90954 Demonstrate understanding of the effects of astronomical cycles on planet Earth

Homework exercise in preparation for the internally assessed achievement standard AS 90954 Demonstrate understanding of the effects of astronomical cycles on planet Earth.

Produce a report in two parts.

Describe in detail using information diagrams and dat the effect of these cycles on the earth with respect to:

Seasonal changes at the North and South poles, latitude of New Zealand, Tropics of Cancer and Capricorn, and the Equator

To be handed in next Monday. The report is your first attempt at using this material. Create your own diagrams and tables. DO NOT cut and paste

Places you will find information include your text book (feel free to use it you have paid for it) wikipedia and youtube. 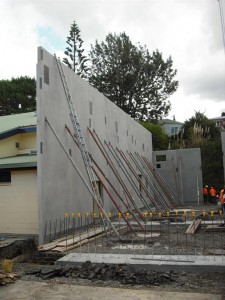 The blocks of the old auditorium are small and held together with mortar. The eight tonne slabs of the new building have an extended structure that is tied together tightly with steel rods.

Chemists have very specialised skills. Architects understand the materials they work with and the forces that hold them together. They can design structures that have never been built before. Architects have designed the new auditorium.

Chemists do exactly the same thing at the atomic, molecular or ionic level.

They can design new molecules with a specific  purpose, to lower blood pressure, blood cholesterol or to conduct electricity like metals. Whether its quick drying paint that will protect the outside of your house for the next 10 years or an insecticide to kill the stink bugs munching happily in the vege garden a chemical architect will draw up a solution.

Chemical architects work with only three types of particle, atoms molecules and ions. The size and types of force between these particles determines many of their properties such as melting point, solubility and electrical conductivity.

In the structure and bonding topic you are constantly referring to three questions:

With Van der Waals forces shapes of molecules, electronegativity and polarity are also important. Molecular shape can be predicted from  Lewis diagrams and Lewis structures. That is just about everything?

How to name alcohols and an introduction to the alcohol functional group.

Check out the following: