Marie Menzies and her year 9 social studies class took over the science laboratory to prepare a series of organic crop sprays. They are non toxic and decompose naturally. They don’t leave hidden toxic residues that can build up over time. Their use is sustainable

In social studies the long term impact of  our activities on ourselves and the planet (our mobile home) is important.

Pest control on crops is important. We farm intensively to grow enough food for the population to survive. Nasty chemicals are required to control organisms that damage our food plants

The government keeps a register of these chemicals with ERMA, the Environmental Risk Protection agency.

If you attack my potato plants when they are growing I will retalliate with weapons of mass destruction.

Chemistry finds its way into every aspect of our life including my vege garden. Food science is chemistry that tastes good.

My first crop of potatos  two years ago wilted in the summer dust and a belated attempt to recover the situation failed in the mid winter frosts. A single bag of potatoes was a poor reward for a lot of effort.

With one set of potatoes ready to flower in mid November last year the unthinkable happened. Leaves at the top of the plant began to curl up and droop.

On closer inspection the cause was soon apparent. The unhealthy plants were crawling with “stink bugs” or Nezara viridula (linnaaeus). Apparently these little suckers pierce plant tissue, remove the goodies and totally deflate the new growth at the top of the plant. The damaged leaves like pieces of punctured balloon are all too visible in the photos.

McGregor’s general purpose insect spray had an immediate impact on the pests. The active ingredient in the insecticide is diazinon.

and now the chemistry….. Compounds like diazinon need to be treated with a lot of respect. Diazinon is closely related to chemical warfare nerve agents such as Sarin and Tabun 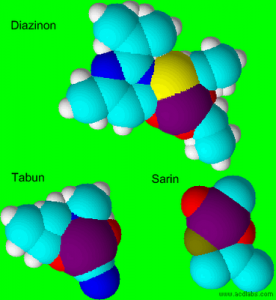 Tabun and sarin were among the agents used by the Iraqi government when it killed 5,000 Iraqi Kurds in Halabja in 1988. Liquid sarin in perforated bags killed 12 people in the 1995 attack on the Tokyo underground.

Chemists have discovered ways to synthesise new molecules with designer properties. Nerve gasses wreak havoc on the transmission of nerve impulses in the nervous system.

The components of molecules responsible for their chemistry are known as functional groups. Chemists have a large tool kit of functional groups that can be unscrewed from a molecule and replaced by another with different properties. Diazinon is a good example. The same purple phosphorus atom and three red oxygens lie at the deadly hearts of these nerve agents.

Should we be using weapons of mass destruction in our gardens?

To sustain life on this planet you will need all the skills you learn in social studies together with the ability to understand complex science. We need a generation of young citizens who are able to engage in intelligent debate and hold those in authority accountable . Good luck your kids depend on you.

Here is the list, look out for them on labels