We are working through a practise paper from the Ministry website

You should have completed question 1 last night. Do question 2 tonight. See last night’s post for instructions on how to hand this work in.

Also revise writing chemical formulae, word equations, fully balanced chemical equations and the reactions of acids and bases by watching the embeded videos below. They are based on lessons and lesson notes I did with you earlier in the year. There is video of practical work you carried out when you were making salts by neutralising acids with bases.

Neutralisation reactions and practical work you carried out. Acids bases and salts.

End of term exams are looming. We revised the atomic structure aspects of this topic in class today and you may choose how you do your exam revision homework.

2) Download the practise paper onto your computer and answer the questions separately on your own paper.

3) Flick through the practise paper questions on the blog and answer them on your own paper.

A look at the periodic table

The reaction between sodium and chlorine to produce sodium ions and chloride ions. Atoms gain lose or share electrons to end up with a full outer shell. Compounds containing ions are called ionic compounds.

Compounds made up of ions are called ionic compounds. When they are named the metal ion goes first and the non metal ion comes last. 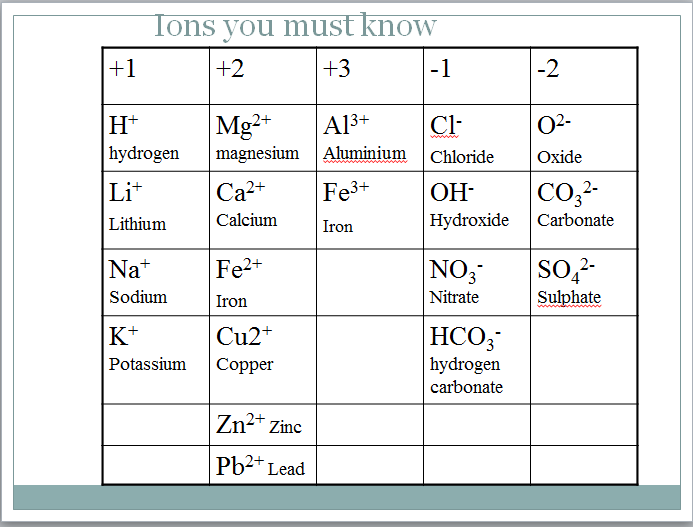 To write the chemical formula from the name go through these steps.

(3)Write the chemical formula. Aluminium oxide has been done for you.

(4)in the case of copper nitrate where two nitrate ions are needed to balance charge we need to put the nitrate ions in brackets e.g.  Cu(NO3)2. 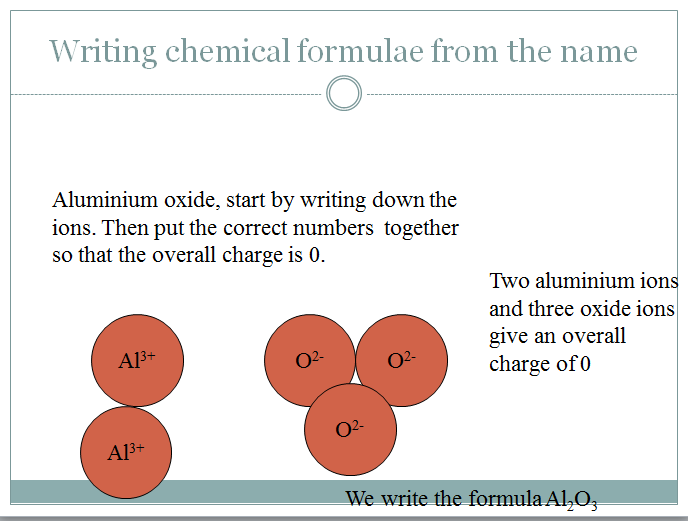 Enter the date in your book and write the chemical formula for these these compounds.

What happens when sodium and chlorine atoms react?

Sodium has one electron in its outer shell. Chlorine has seven electrons in its outer shell. When they react sodium loses an electron to become a sodium ion with a charge of +1. Chlorine atoms accept an electron to become chloride ions with a charge of -1. After reacting the sodium and chloride ions have a full outer shell of electrons. A full outer shell of electrons is a stable arrangement. The inert gasses in group 18 of the periodic table all have a full outer shell and characteristically are very unreactive (they don’t easily combine with other elements). The new substance sodium chloride is made up of ions. Compounds that have ions bonded together are called ionic. The ions are held together by powerful electrostatic forces. Ionic compounds typically have high melting and boiling points as a consequence.

Homework… how much of this do you understand?

Electrolysis and redox reactions taking place at the electrodes

You are already aware that ionic compounds conduct electricity when molten or in the aqueous state.

What happens at the electrodes when electrons are transferred?

Cations receive electrons at the CATHODE, they are REDUCED.

Anions lose electrons at the ANODE, they are OXIDISED