Some early references to the use of soap include:

How was early soap manufactured?

Soap was originally made by hydrolysing esters in fat. The alkali was made from the ash collected after certain hardwood trees had been burned. Hot water was poured over the wood ash to dissolve the alkali. Potassium hydroxide was originally known as potash for this reason. The alkaline solution was boiled with animal fat to make a crude soap.

How does soap remove grease and oil? 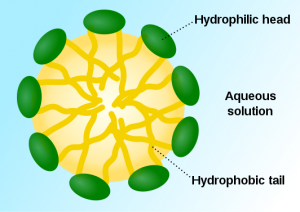 Soaps and detergents are what chemists refer to as surfactants. They are active on the surfaces between chemically different materials. Soaps have a fat soluble group (lipophilic) at one end of the molecule and a water soluble group (hydrophilic) at the other. Soap can suspend oil and the dirt it attracts and assist its removal

Surfactants are incredibly important and you should be aware of their presence as they can cause problems once they get loose in the environment, Some surfactantsare  toxic to animals, ecosystems and humans, and help disperse other environmental contaminants.

Surfactants are found in emulsions, paints, adhesives, agrochemical formulations, cosmetics, food, sanitisers and spermicides. Surfactants are even produced in the lungs of unborn babies to assist breathing and prevent lung collapse.

Cold creams have been used for thousands of years to clean skin and remove makeup. This is the chemical process we used.

The borax and water should be heated to about 70 degrees. This will be used to hydrolyse a small amount of ester from the wax into salts of the organic acids (soap, emulsifying agent).

The wax and parfaffin should also be heated to about 70 degrees. The esters in wax are non polar and attracted to each other through weak Van der Waals forces. The paraffin molecules are non polar. They are both lipophilic and the wax dissolves in the paraffin.

Once the two solutions are at the correct temperature, mix them rapidly with stirring to form an emulsion. Put some perfume in and you have an ideal gift for mothers day. Water it all down a bit, throw some abrasives in and you have car polish for father’s day.