.
Crude oil is formed from the remains of plants and animals that lived millions of years ago. These remains form sediments, and become buried under layers of rock. The remains decay without oxygen, and under heat and pressure become crude oil. Crude oil is considered a fossil fuel as it is made from once living organisms. Fossil fuels are said to be non-renewable and finite – that is we only have a limited amount of them. Coal and natural gas are also found with crude oils. When we burn these natural gases and fossil fuels we release carbon dioxide back into the environment. The carbon dioxide is used by plants in photosynthesis, these plants will decay or be eaten by animals to eventually produce more fossil fuels – this is called the carbon cycle. Crude oil is a mixture of hydrocarbons, compounds made up of hydrogen and carbon atoms. Crude oil is separated by physical methods using a process called fractional distillation. 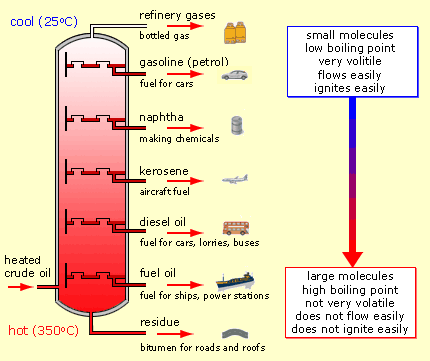